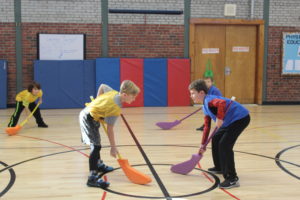 In what is now becoming an annual tradition, the Vine Street School hosted an athletic tournament on Bangor Day.  The Bangor Day Tournament, as the event is called, pits intramural teams of second and third graders against each other in a three day competition.  Last year, soccer was the game of choice as teams competed on a muddy field to crown a winner.  This year, due to the snow, the games were held in the gymnasium and the sport was changed to field hockey.  Under the direction of gym teacher, Justin Marks, 4 teams played in  semi-finals to determine which two teams would play in the championship game on Bangor Day.   The newly remodeled gymnasium was the perfect location for the event.  Scores of students and staff cheered on from the stage while the teams engaged in exciting rounds of athletic competition.  To add to the excitement, guest referees monitored the games throughout the week.  During Friday’s championship, Bangor High School soccer coach Joe Johnson and two varsity soccer players called the game.   Congratulations to all students and particularly the winning team!  A special shout out goes to Zander who is the only student to have played on both championship teams!

Latest News at our School

Events At Our School